Supported by a community based not-for-profit charitable society, Fraser Marine Rescue Society, and as one of the busiest volunteer marine SAR units on the coast, RCM-SAR Richmond is involved in more than 4 dozen marine incidents each year ranging from responding to broken down vessels that are at risk, to medical emergencies on the water. RCM-SAR is just one organization that operates as part of the maritime Search and Rescue system in Canada. RCM-SAR has the ability to work with partners across jurisdictions, including primary maritime SAR assets of the Canadian Coast Guard (CCG) and Royal Canadian Air Force (RCAF), to effect positive outcomes to any potentially dangerous or life threatening maritime situation.

In addition to providing emergency response, we participate in more than 20 boating safety and public awareness activities through-out each calendar year. Such events include (but are not limited to): Fireworks events, City of Richmond dock & shoreside events and yacht club events, to name a few. We are also providers of the Pleasurecraft Safety Check (PCSC) program. 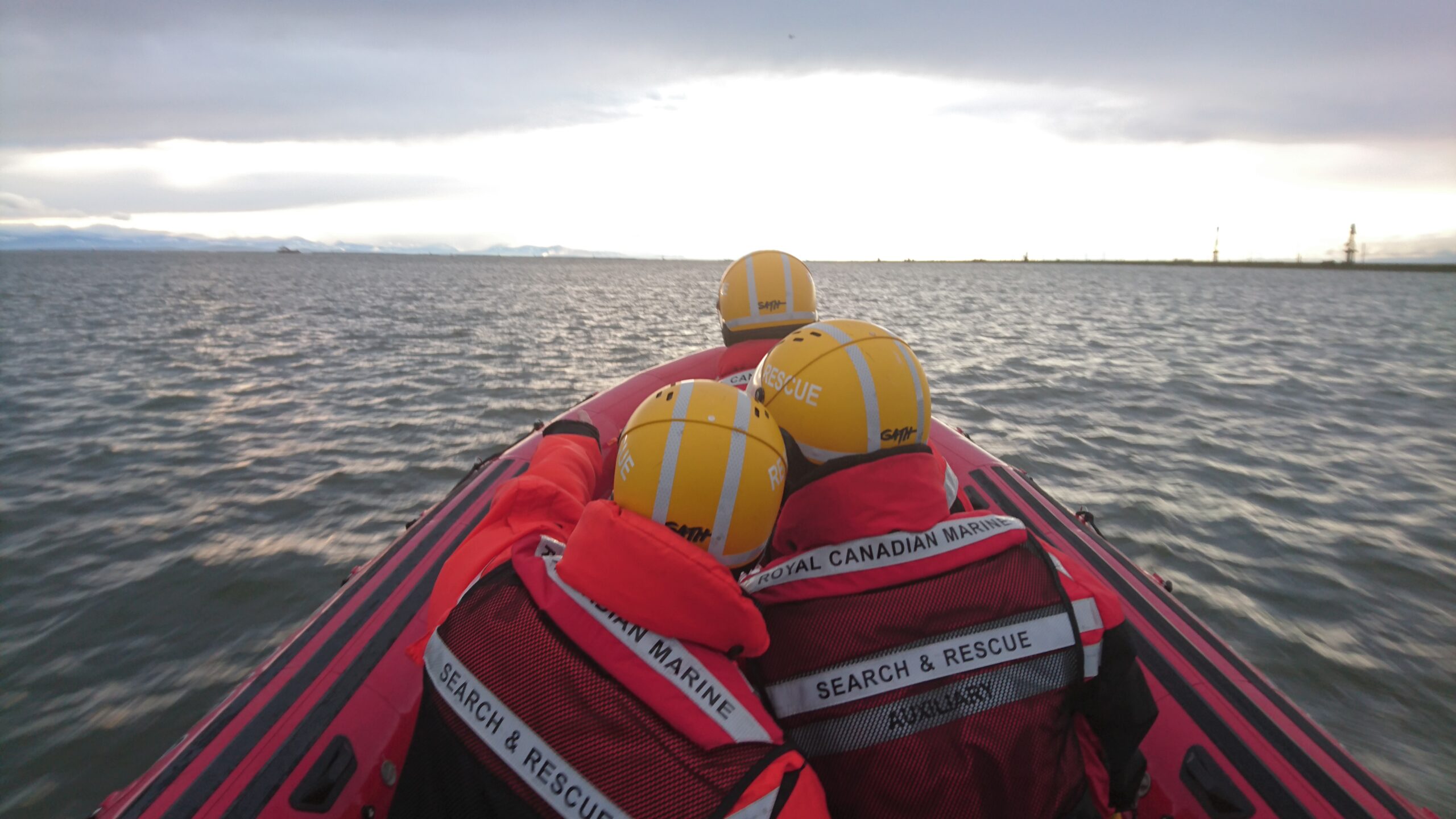 For a marine emergency on the water: You can reach Coast Guard on VHF CH 16, or *16 on mobile phone in coastal waters of B.C., Canada where service is available.

In its’ formal inception in 1988, Station 10 was originally known as Station 7 funded through the “Steveston Marine Rescue Society”. At this time operations were based in Steveston only and the monies raised by the Society supported Station 7. Small fundraising operations were organized and usually less than $1,000 was raised a few times a year, which did keep the operation functional. All members were required to purchase their own equipment as there was no funding to cover those expenses.

In 1991, there was a general request within the community that a Dedicated Response Vessel (DRV) was needed near the airport. The Society was asked to come up with a plan to raise funds to purchase such a vessel, similar to those being utilized in other units. A request was made to Canadian Airlines Employees Charitable Donations which subsequently established a campaign. This resulted in our first Rigid Hull Inflatable vessel in 1992, which was named, “Guardian”. A station was established in the Middle Arm, as Station 6, just north of the Richmond Yacht Club.

This immediately raised another problem and that was that most of the fundraising by the society at the time was limited to the Richmond-Steveston area. So in an effort to attract more funding to meet the demand, the members opted to establish a society solely for Station 6,“The Strait of Georgia Marine Rescue Society” (SGMRS) to focus fund-raising to the more immediate area of North Richmond.

Currently there is a Titan 300 Pilot RHIB (RCMSAR Unit 7) operational in the Steveston area and a Titan Delta 249XL RHIB (RCMSAR Unit 6) in the Middle Arm area. The crews of RCMSAR Richmond – Station 10, continue to operate both vessels, 6 & 7. Its’ members have become recognized as one of the top marine search and rescue (SAR) groups, not only in the Pacific Region, but in Canada.

In order to streamline operations of the volunteer service for Richmond in 2016, both societies (RMRS & SGMRS) voted to amalgamate into a new, single, joint-led society as “FRASER MARINE RESCUE SOCIETY” (FMRS), identifying with its immediate area of operation and encompassing all 7 communities that are affected by its’ membership.

There’s more going on with RCMSAR than SAR CREW. You may encounter a wait-list to get onto SAR response duty, or perhaps you’d rather not go out to find those lost at night, in the dark facing inclement weather. That’s okay! We also have opportunities to recruit SAR SUPPORT positions. These roles can be dockside assisting with boating safety initiatives or as elected members of our society board, or even specifically to help with fundraising! There’s always lots to do and many ways to get involved!

All prospective recruits must be able to respond to our vessels within 15 minutes. Interested new members are asked to get their Transport Canada Pleasure Craft Operators Card (PCOC) & Industry Canada Radio Operator Certificate – Maritime (ROC-M) prior to joining. These courses are publicly available through local providers, such as the Richmond Yacht Club. Until this requirement is met, prospective new members are able to assist shore-side in various support roles with community events, public displays as well as fundraisers or on the board as part of our Society.

Once each fall our training committee puts on a new member SAR safety course that runs 1 day each week for 4 months duration. Some of this training will also include 4 – 6 weekend-half-day sessions. Attendance in these sessions is mandatory. This course provides for introduction to the federal maritime SAR system, boat crew & personal safety and upon successful completion allows progression to the next step which includes waterside training on docks & introduction to our Fast Response Craft (FRC’s).

Beyond the new member SAR safety course, our crews can receive a variety of training courses & evaluations, some even make use of our regional state-of-the-art full mock-up training simulator in Sooke, B.C., as part of becoming proficient SAR crews, including:

§ Given the amount of volunteer time our training membership puts into these courses, while we understand life happens, we ask for a minimum of 3 years service to our group as pay off to the introductory training.

§ The training courses above may be typically attained within a 3 – 7 year time frame, however this is dependent on many factors including, but not limited to: individual performance, safety, participation, dedication, self-discipline & accountability.

§ For further information send an email to: info@rcmsar10.org with an intro letter outlining: your distance to our locations, why you may be an asset to our team and the SAR System, note any special skill sets you have that could benefit our cause (on/for the boats, or on a committee or board!). We will reply!